My husband proposed to me at Walt Disney World in December of 2011, so Disney has a very special place in our hearts. Growing up, my grandparents had a house in Sebring Florida so I would go to Disney World almost every year and Ryan looks to Walt Disney as a role model and creative inspiration. We have been there 4 times together – we’re obsessed. When it came time to choosing where we wanted to go for our Honeymoon, we knew we wanted the hot hot heat and beach, but also thought it would be special to go back to where we got engaged. This thought process of course lead us to Florida. We spent some of our time in the parks, and some of our time on the beach and the pool. I did a ton of research leading up to our honeymoon, what restaurants to choose, what camera to buy, what was best at Disney World for a honeymoon. I won’t pretend we’re not total Disney geeks but we did want some romantic time and some space from the chaos. I’ll share some photos from both aspects and give what is hopefully some good advice for anyone hoping to make this trip. (If you want to see the pictures bigger, just click them and they’ll expand.)

While we were at Disney we stayed at Disney’s Port Orleans Riverside. If you’re going to go to Disney stay on property at a Disney hotel, it is way more convenient to get around and I think it adds to the magic a lot. Riverside was a perfect choice for a honeymoon, it is very large, on a huge river and has lots of walking trails. It is a moderate level resort (the levels being value, moderate, deluxe, and deluxe villas) but it really felt more like a deluxe. The rooms are updated and fairly large and we loved that there were small quiet pools which were hardly used and so much more peaceful then the big pool that was just a ton of kids. We ate at their sit down (table service it’s referred to if you’re on Disney dining plan) restaurant and my husband loved it.

I’d say my favourite park is Epcot. I used to love so much Hollywood Studios, which is still great, but Epcot is more geared toward adults. The other parks are about the rides and Epcot is more about learning and exploring and I enjoy World Showcase a lot. England and France are probably my favourites. Epcot has rides as well, we like Living With the Land, Soarin’, Test Track, Spaceship Earth and Sum of all Thrills. I HATE Mission Space, it scared the hell out of me and made me feel so sick, and normally I like crazy rides. One major benefit of Epcot is the drinking! You can try different drinks from every country, although I’m not much of a drinker so I didn’t get very far. 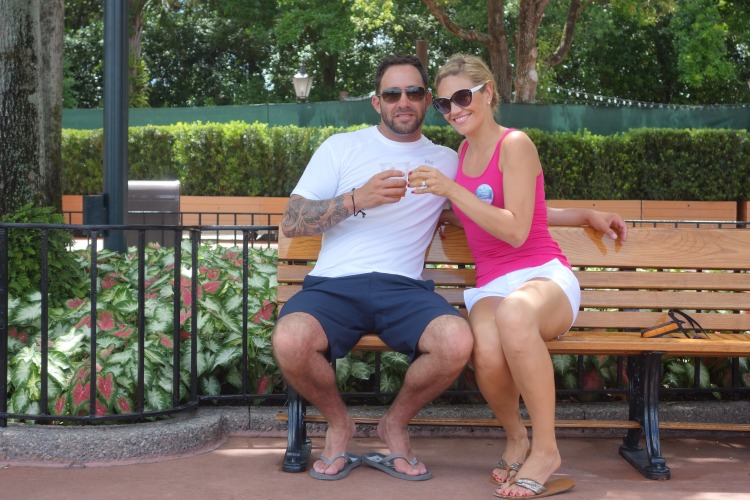 Even though Epcot is my current favourite, we still had fun at all the parks. We did a tour at Magic Kingdom called “Walt Disney: Marceline to Magic Kingdom” and loved it! A guide tours you around and we got to go “backstage” before the park was open to the public and tells you a lot of history, secrets and inpsiration. If you’re interested in the history of the parks and what goes on behind the scenes, you will definitely enjoy this. Next time (which won’t be for a long time, probably when we have kids!) we want to try to do the “Keys to the Kingdom” tour which fills up fast. 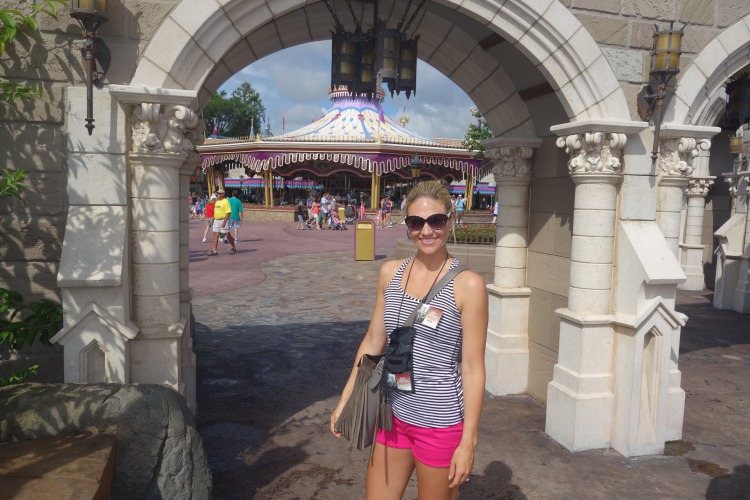 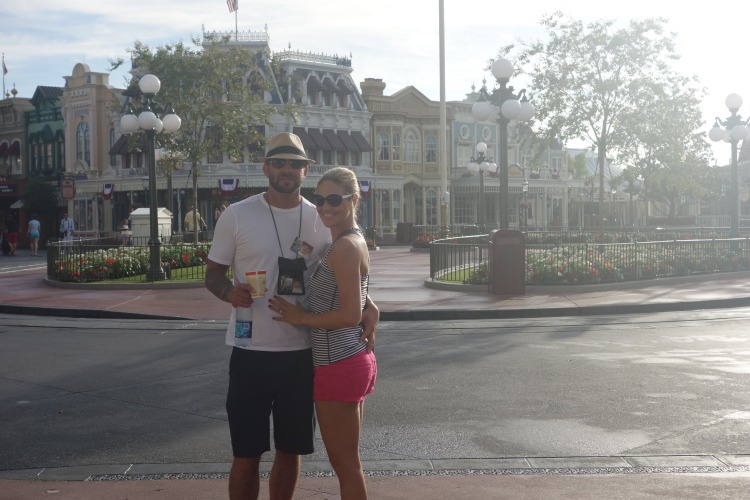 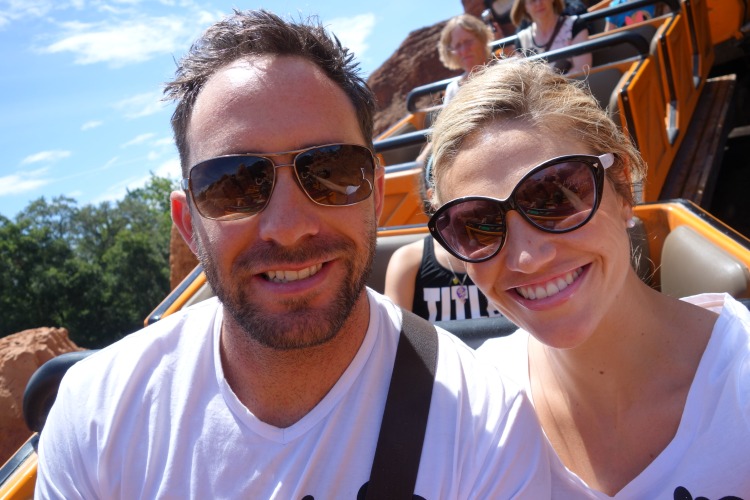 We rented a car while we were there so we could go to both the Atlantic Ocean and the Gulf of Mexico. Although the Gulf side is calmer and has more emerald waters, we like the Atlantic side too with its big waves. We have always talked about getting a vacation property in Florida and visiting both sides made us want to do it more than ever. It was so hot and humid while we were there that it would usually get a thunderstorm in the afternoon, but it ended up being perfect so we could go back and get pretty for dinner after being in the sun all day. As much as I loved the beach, I enjoyed going to pools too, you can lay out for hours and take a quick dip when you’re hot – it’s just so convenient. 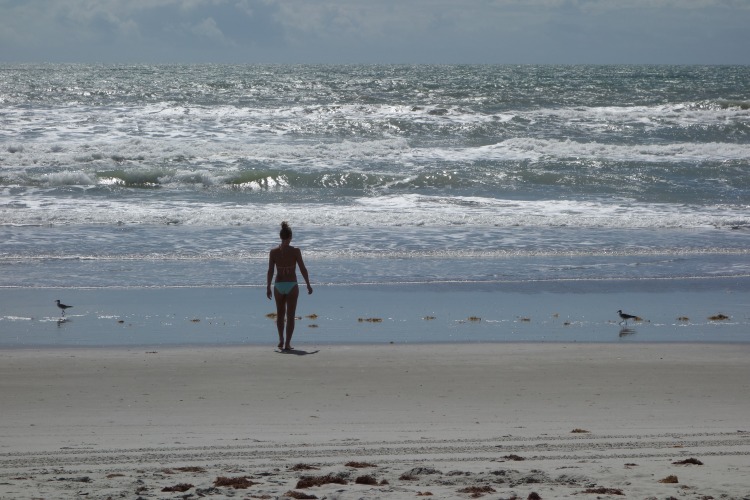 I think this bikini is super cute, and a total bargain! I got it at Simons. 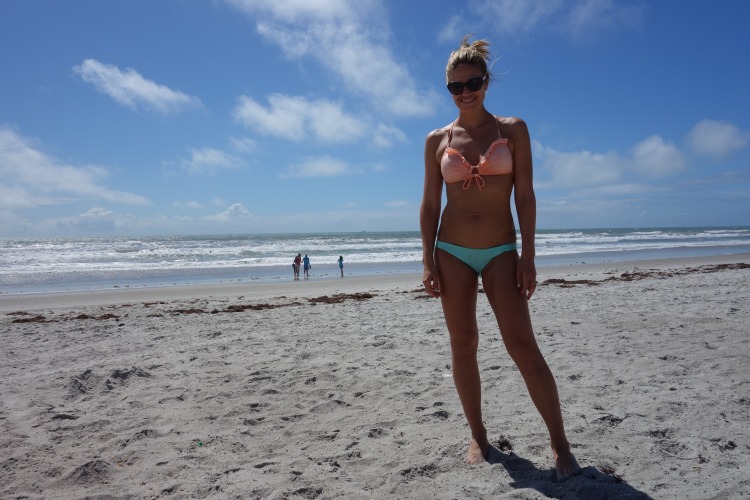 Dinner on our first night, at Narcoossee’s on Bay Lake, really delicious. 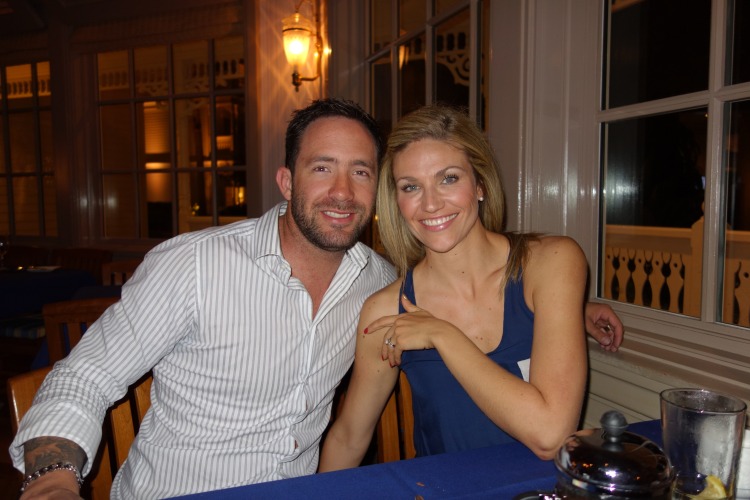 This is my favourite lip gloss right now, it’s a MAC lipglass in Dreamy.

I borrowed this dress from my friend Erin, but I’m so obsessed with it I’m going to figure out a way to steal it. It’s from American Eagle. 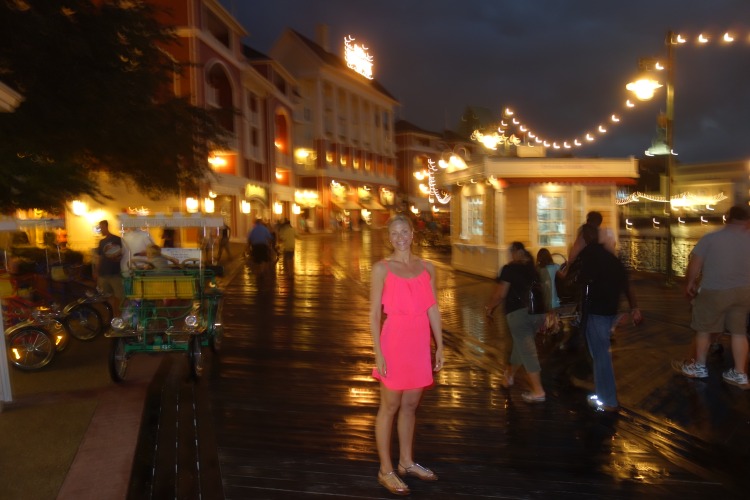 This skirt is from Express, they always have such cute summer stuff. I actually got this when I was in Vegas but we have an Express here now too.

I’m obsessed with a big high bun, totally out of the way, easy and so chic. 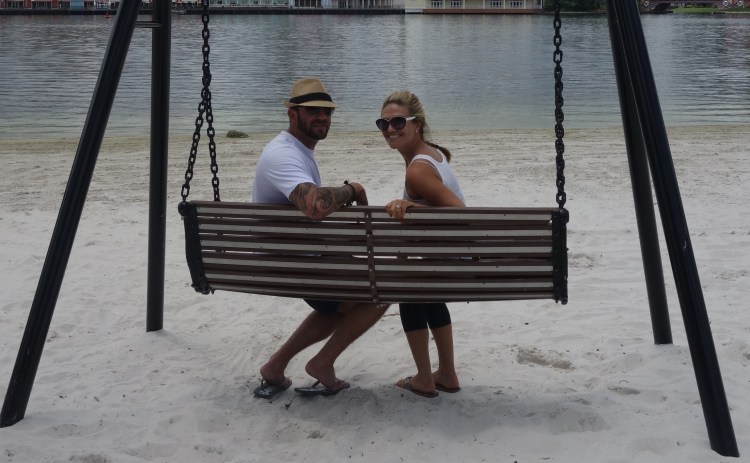 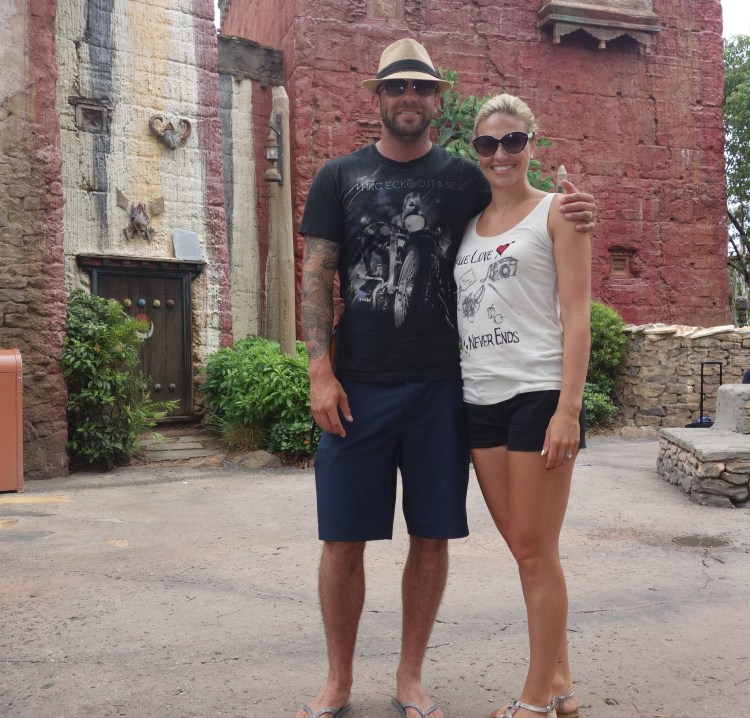 I ate so much ice cream on this trip! 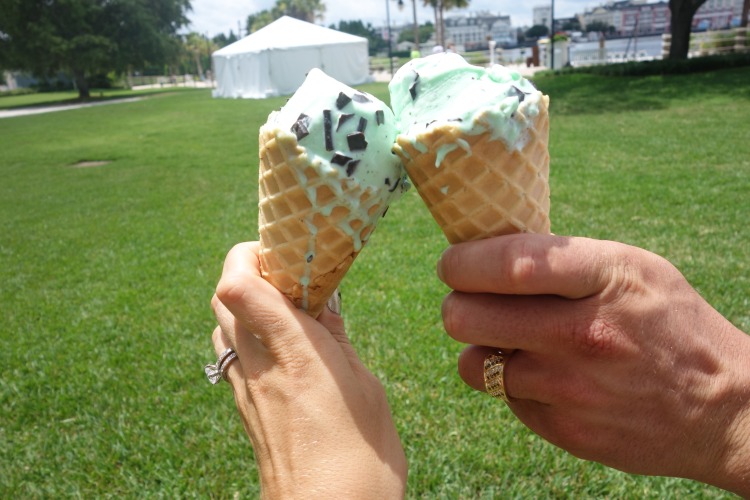 He loves his cigars! 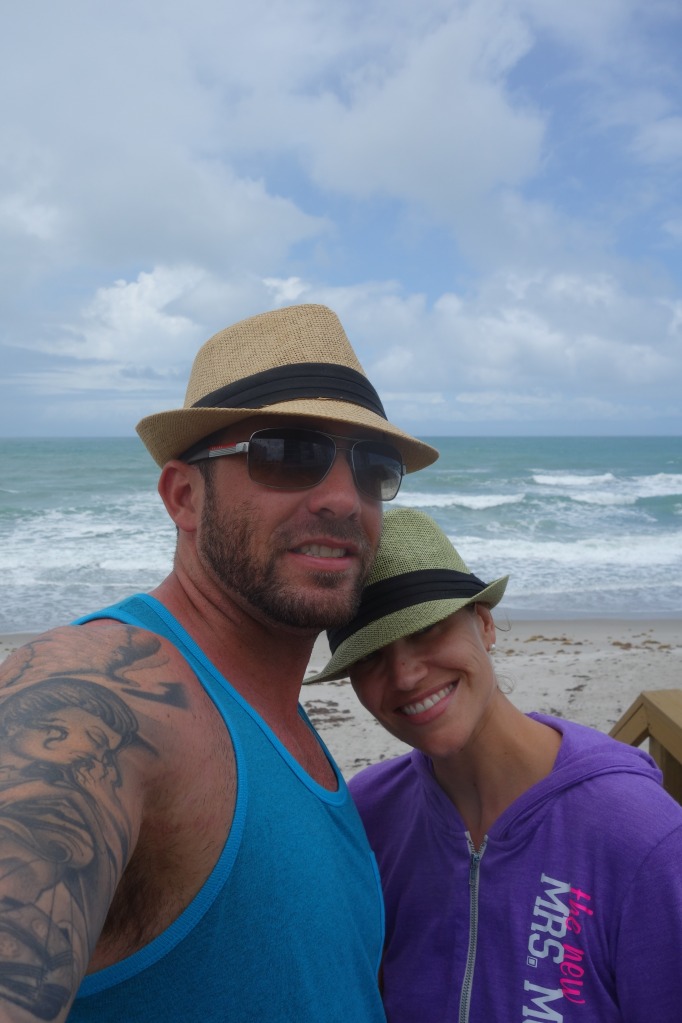 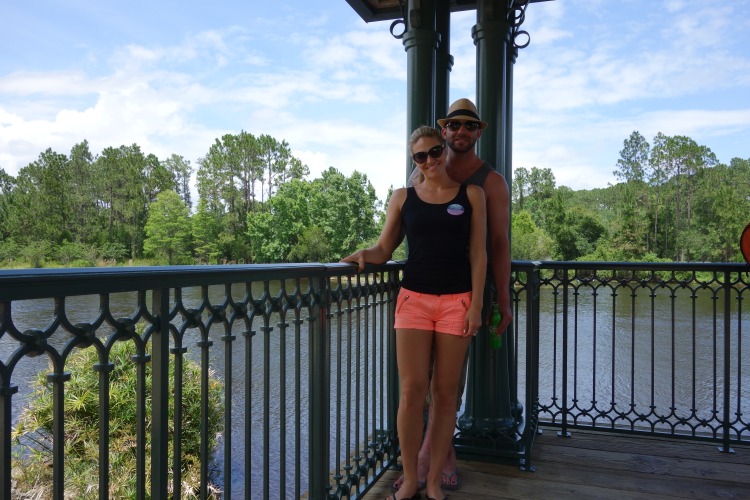 I know we’re complete nerds, but I don’t care. I love these shirts.

This picture is quintessential Florida to me, as a tourist anyway.

It’s so hard to come back to reality! I can’t wait for our next vacation, I’ m thinking Hawaii!

One thought on “Honeymooners”