I know I’m a little late to the party in talking about an oscar party and the oscar fashions, but it just helps support the theme of this post – lazy! We love to host parties at our house but we all know it’s a lot of work! We really wanted to have people over for an oscar viewing party but wanted to do it cheap and easy. I can’t think of anyone that would disagree that a potluck is the easiest and laziest way to throw a party. You hardly even have to host, just open your front door and have plates available. We had a lot of fun; with popcorn, chocolates and drinks in the basement with the academy awards playing on the big screen and upstairs hosted the food and what was supposed to be the “quiet” watching area, but I think it ended up being much louder. My only request was that people bring their favourite dish and that could have been literally anything. I joked to my friend Hollie that she could bring pepperoni sticks and a 2 litre of coke! We also do winner predictions with $10 each contribution, this year I won the pot – but that wasn’t just good guessing I do a lot of research online before making my predictions! 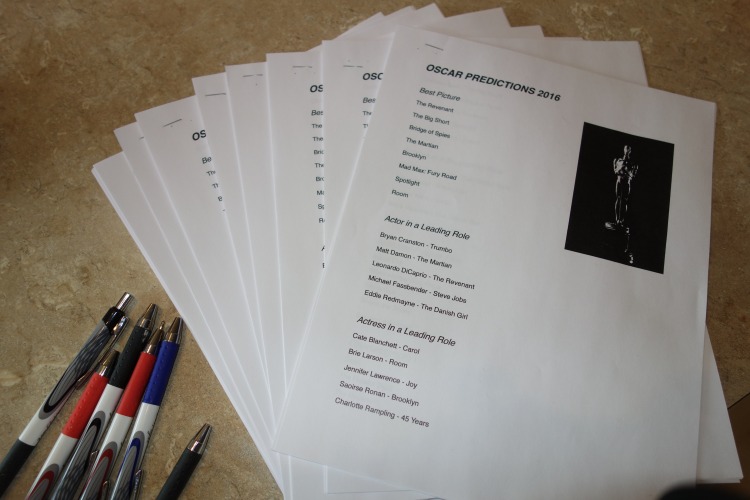 I leave out the categories that no one really knows about, like shorts and foreigns and documentaries. Not that those aren’t worthy!!! They’re just not as out in popular culture. It was really a neck and neck race between myself and my step mom Jane, we are both pop culture junkies and super competitive, but I came out victorious!

My friend Erin and I did 2 cheese and 2 chocolate fondues as our contribution to the potluck. The cheese ones were a baked brie with apples and a swiss cheese and champagne (seemed fitting for an oscar party), the chocolate ones were a coffee toblerone and white chocolate marshmallow with walnuts (that one was pretty much made up on the fly, after some serious trial and error). We put three of them in crock pots, they had to mostly be heated up on the stove to get the cheese melty enough, but they lasted all night once they were transferred. So delicious! 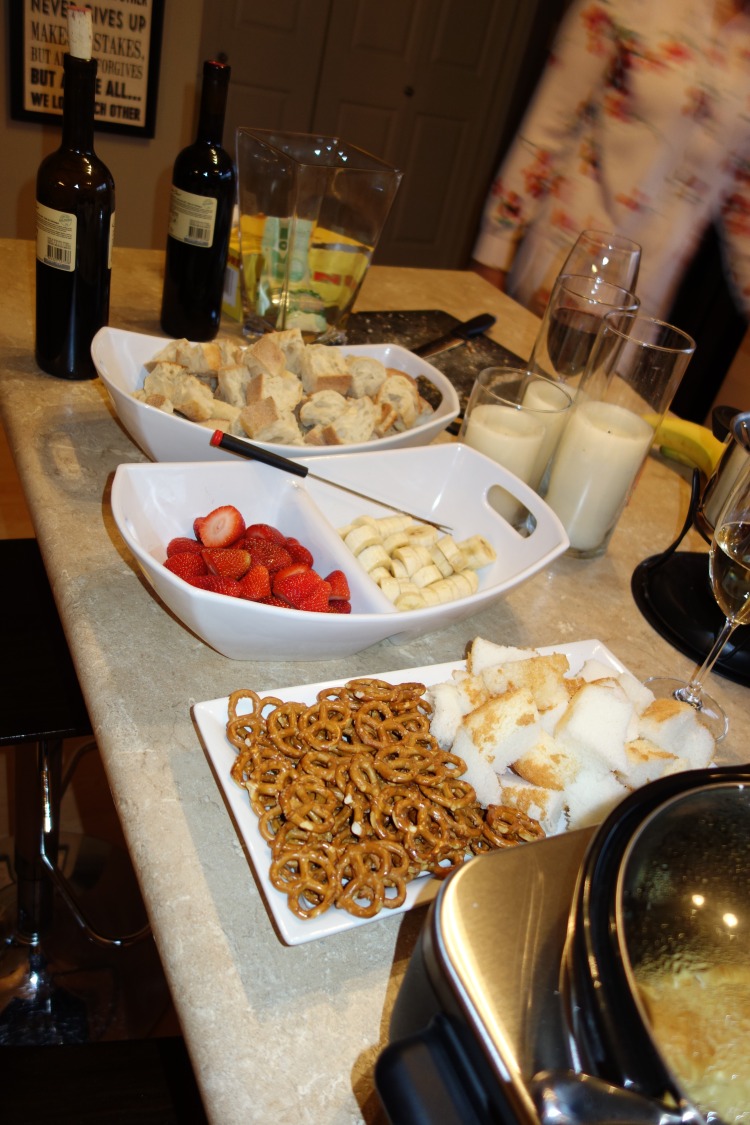 The dippers! We also included a veggie tray for the dippers – really good with the swiss. 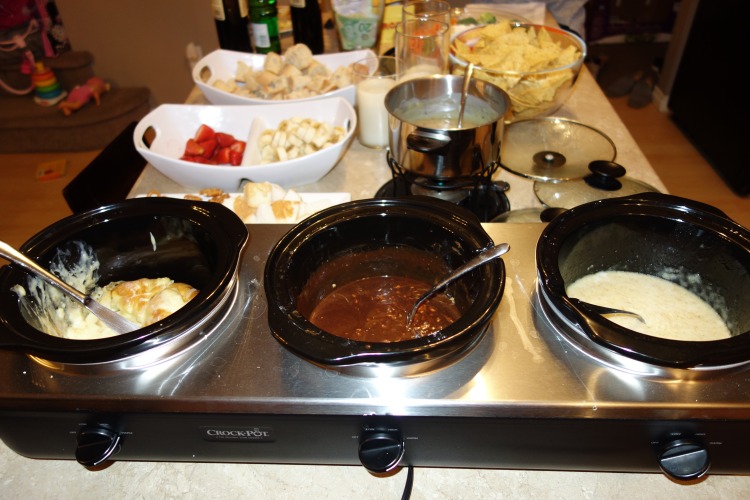 People brought so many delicious things to this party! I had so many leftovers for the week (another major benefit to hosting a potluck!) 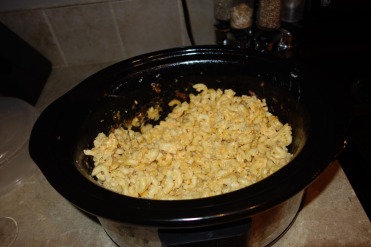 We had several crockpots plugged in all over the kitchen, the mac and cheese and my Dad’s delicious chili that I ate for three days after.

You have to have wine for an Academy Award party. 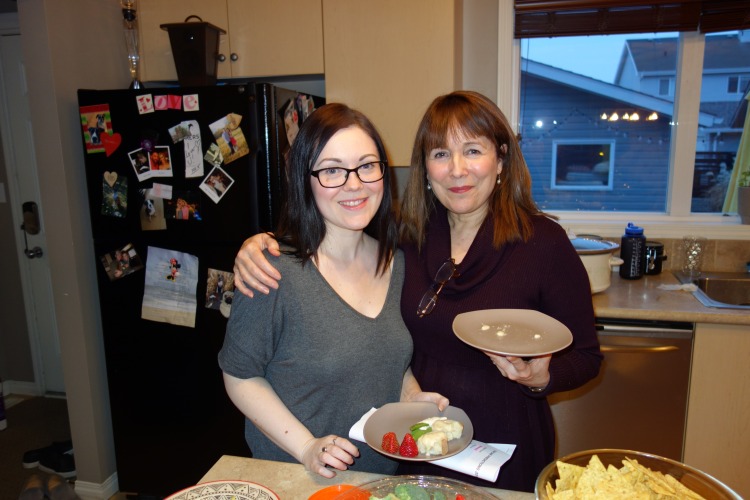 Filling up the plates, I went several rounds!

Part of the downstairs crew.

Now onto the fun part, the dresses.

My absolute best dressed without a doubt was Saoirse Ronan. The dress was amaze, so gorgeous and the colour! I die for it! 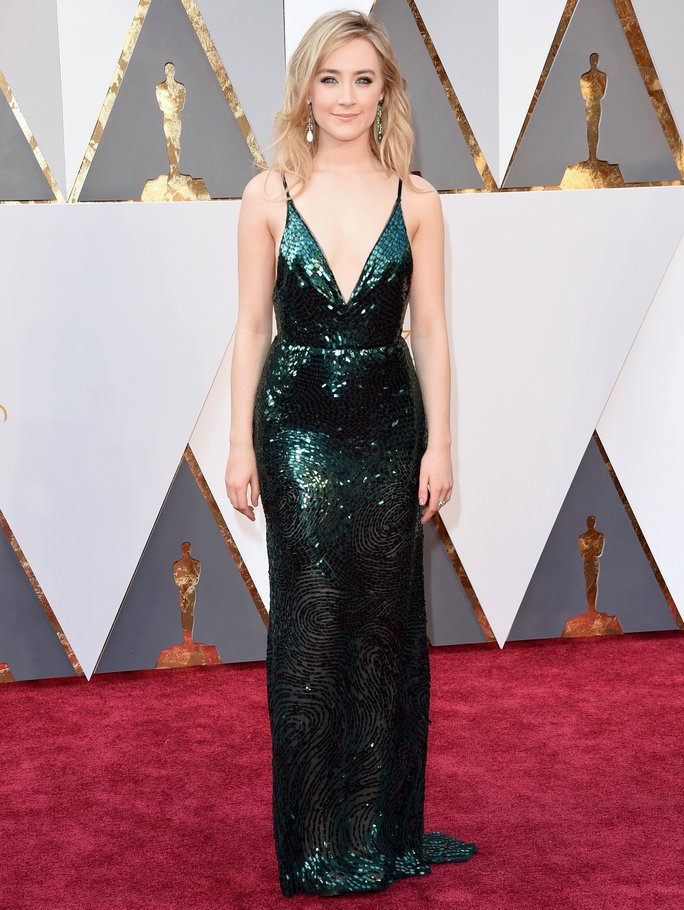 Close seconds were Charlize Theron in Dior (simplicity at it’s best) and Priyanka Chopra in Zuhair Murad (an edgier look that I thought was amazing on her). 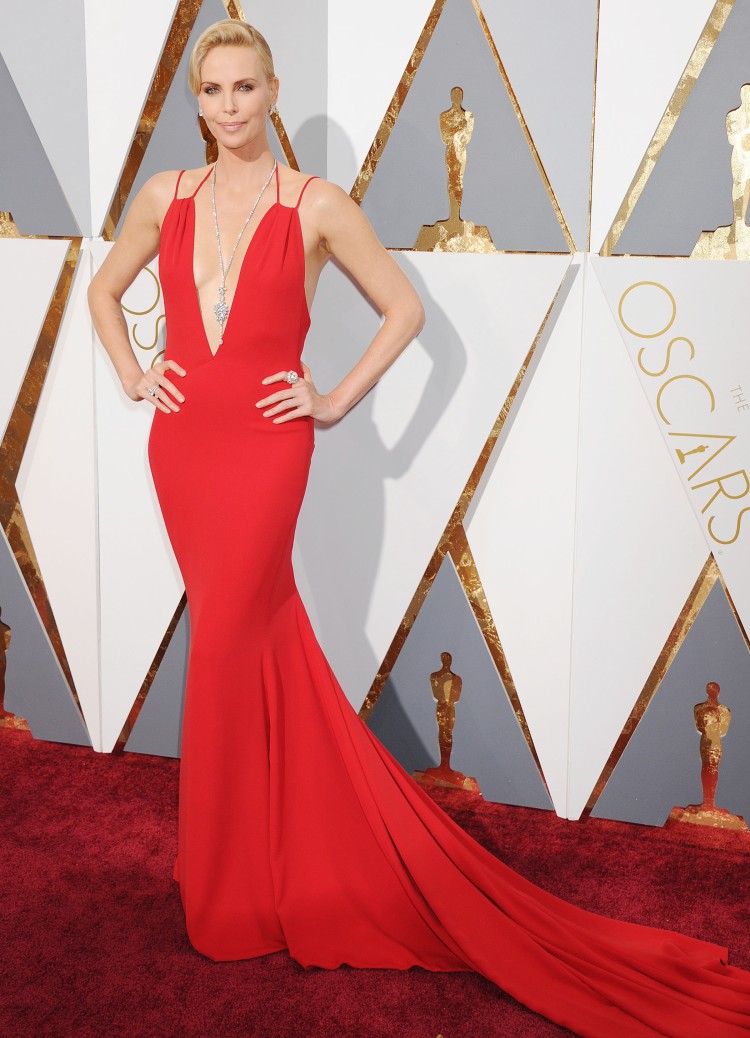 Worst dressed – sorry to say because I adore Mindy Kaling but this Elizabeth Kennedy dress was not cutting it for me. Way too tight and completely bland in the front while carrying a giant tarp from the back! I know there were some dresses that were ten times more offensive then Mindy’s  but I guess this was more my biggest disappointment because she usually takes a lot of fashion risks and kills it. 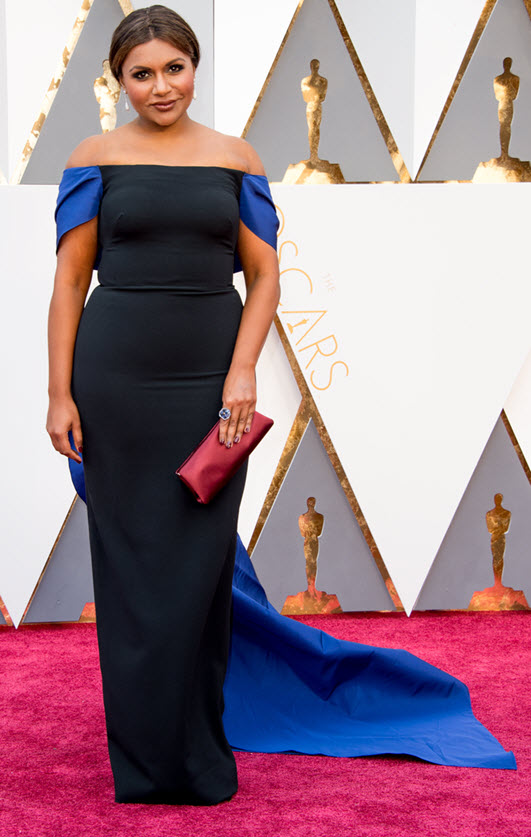 Close seconds – Kate Winslet in Ralph Lauren – WHY with this material!? What is it even? It makes her look large and she actually has a great figure. It’s basically a garbage bag that has been pinned into dress form, I hate it! 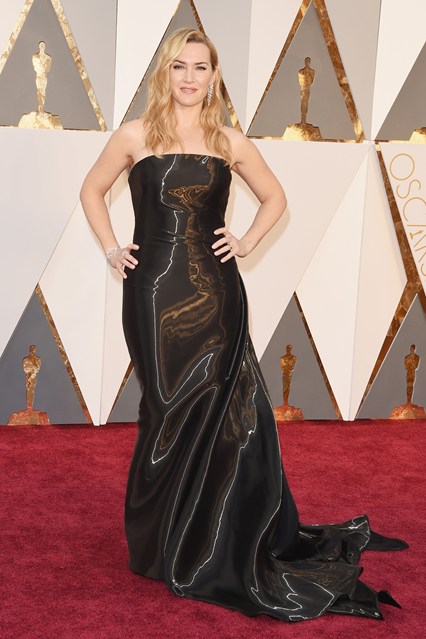 Reese Witherspoon in Oscar de la Renta; terrible material (is it taffeta?), bad fit and stupid additional material all over her breast and bum! She can do better! 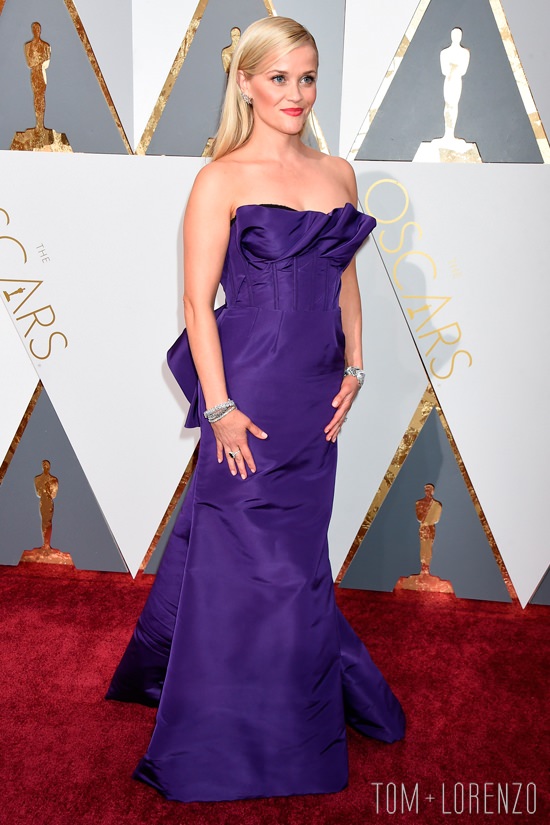 Finally, the dress I can’t decide if I love it or hate it. I know I don’t like the belt but I think I like the colour and the ruffles – I really can’t decide on this one. Brie Larson in Gucci, I know I hate her hair. 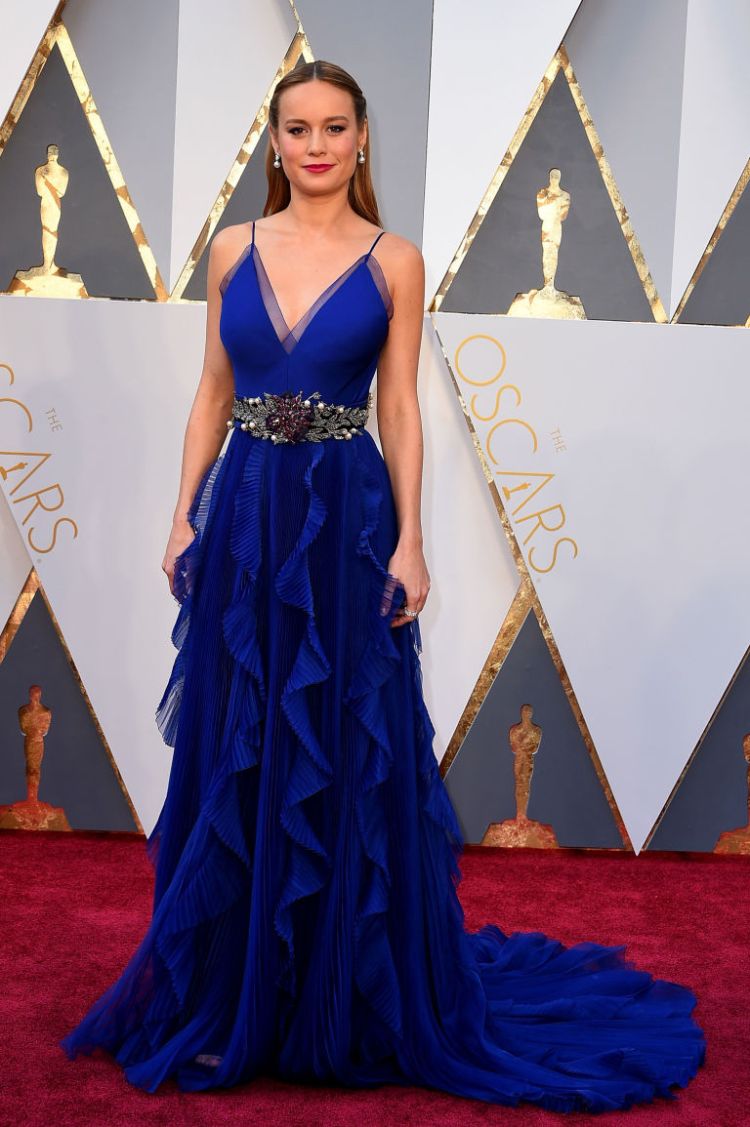 My Oscar outfit consisted of a tank top and jeans, so I’m not in much of a position to judge! My top is Triumph and my jeans are Express.

I bought this vest earlier in the winter but I have only worn it a couple times. I had worn it the previous times with a white tee underneath but I wanted to make it a little dressier and take some pictures! On Friday Ryan and I went to a birthday for a good friend of his at Kitchen in downtown Edmonton, it was a good opportunity to wear the vest and style it a little more trendy. Items like this I don’t spend a lot of money on because I don’t get a ton of opportunity to wear it and it’s definitely a trend, probably not a forever piece.

I brought my little Minnie girl along for the photos, to be honest she was acting pretty wild – it was windy and it was making her nutty!

The weather this winter has been just bizarre, it’s early February and it feels like spring – I haven’t been wearing boots at all and I’ve only worn my heavy winter jacket a few times. Although as I write this outside the window it’s snowing. But I won’t complain! This is the warmest winter I can remember having here. 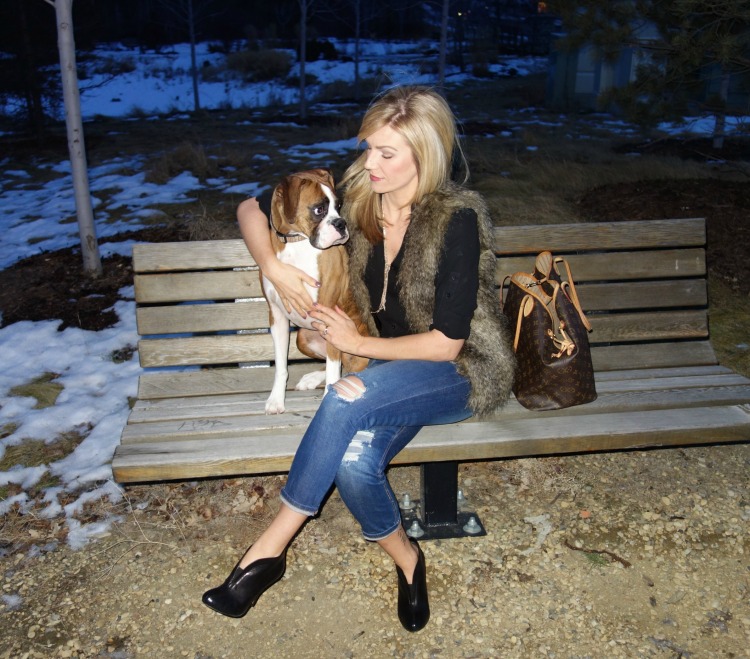 We went on a recent trip to Vegas (believe it or not…) and these are some of my favourite moments and looks of the trip. Going around November through February isn’t my favourite time to go because it’s not really pool weather, and this time we were with my in laws and a lot of my husband’s extended family for his Grandparent’s diamond wedding anniversary. They are all great but it definitely makes for a different and more subdued trip! Plus Ryan was pretty sick with cold/flu the whole time so it was a lot quieter of a trip to Vegas as he was feeling so under weather.

This is probably more of a summer friendly look but it was new and I love it, I was chilly by the end of the night but it was worth it!

This is my favourite new top, I’m in love with the long fringe, plus I was comfortable all night.

We went to dinner at Blue Ribbon Sushi at the Cosmopolitan that night, it was our second time there and it was just as good!

This was my most casual night there, I was super comfy the whole night and it was pretty chilly that night so I was glad I was wearing a sweater. We went to eat at Mon Ami Gabi at Paris, which is one of my favourite restaurants. If you go, make a reservation and show up to it a couple minutes early to wait for a table on the patio – it is totally worth it for the view of the Bellagio fountains all night.  We went for a drink at a lounge at the Cosmopolitan with the whole family and then Ryan was really not feeling well that night so it was early to bed.

I wore this fab dress for our last night out. We went to FIX at the Bellagio for dinner then to see the Cirque Du Soleil show Zumanity – we really enjoyed it, it’s fun and the theatre is a really small and intimate setting which makes it feel really interactive.

I think this is our last trip to Vegas for a while, as much as we love going there and have so much fun – it is very costly and we are itching to mix it up. We’re trying to plan one big trip before starting to talk about baby plans, so we’re throwing around ideas of Italy, Greece, New Zealand and Hawaii. The second I get back from a trip I want to start planning the next one! 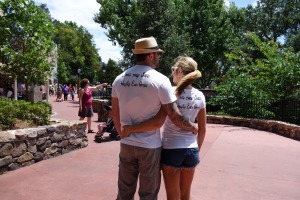